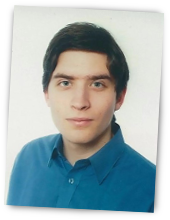 I was born on 29th December 1989, in Budapest. I began primary school in 1996 at the Mihály Pollack Primary and Music School of Tahitótfalu. As my year-end records were excellent throughout the 8 years, I received the Mihály Pollack Award when I graduated in 2004. On 15th March 2005, I received the "For Tahitótfalu" Youth Award with two of my classmates for my school results and for winning the grand prize at the "Rainbow" art competition of Zánka with my enamel plaque.

In 2004, I was admitted to the Franciscan Grammar School of Szentendre. In June 2007, I passed the Cambridge CAE advanced level English exam.

I graduated from grammar school in 2008, passed my final exams with a 468/480 point (98.5%) result, and I continued my studies at the Faculty of Information Technology of the Péter Pázmány Catholic University. I finished Computer Engineering BSc in January 2012 and MSc in January 2014, both with honours.

During my university studies, I taught the following practical courses:

In the 2012/13 semester, I was a member of the faculty's Educational Committee. In 2013, I was responsible for the class graduating in January 2014.

In December 2010, I was elected as a member of the St. King Stephen Parish's committee in Tahitótfalu.

In the summer of 2011, I applied for an internship position at Morgan Stanley, and I stayed there as an intern until January 2014 (except the summer of 2013). In the autumn of 2013, I was enrolled to the firm's graduate program, which I attended from February to May 2014 in New York. Since May 2014, I've been working at the firm's Budapest office, in Firm Risk Management IT as a permanent employee.