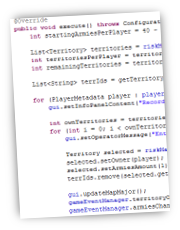 Primarily this is why I chose to become a software developer. I started programming at the age of 11-12 by learning BASIC on my grandfather's Commodore 128. At the age of 16, I learnt PHP and started developing websites. Later, it was joined by Javascript, then, in the grammar school, Pascal and Delphi, and finally, at the university, C++ and Java (and many others, e.g. C#, Python, Perl...). In my free time, I mostly only use the web development languages.

Currently, my biggest pet project is Jeeves, a household computer consisting of a Raspberry Pi, a touchscreen and a hard drive. It's currently able to play music from the hard drive, but later, it will be capable of e.g. storing recipes and performing unit conversions.

As it's probably apparent looking at the design of this website, I like to go trekking (in contrary to my other hobby above). Geocaching fits into this nicely.

Geocaching is a freetime activity originating from the U.S., a "green hobby", which is officially represented in Hungary by the Hungarian Geocaching Public Benefit Organization (MGKE).

The point of geocaching is that a player hides a well-closed chest (the "cache") at a location that is worth to see and explore because of some reason, and records its exact coordinates with a GPS device. These data are uploaded to geocaching.hu and to the international website, too, and are made publicly available.

The cache itself is just a waterproof household box which is large enough to fit a logbook, a message in two languages for the (maybe unintentional) finder, a pen and a few small gifts. The finder can exchange one of the gifts with another one he/she brought with him/herself.

I've hidden one cache so far, at the ruins of the former Roman stronghold Castrum Cirpi, located north of Tahitótfalu. Its name on the Hungarian site is GCCIRP, and GC1MTMK on the international one.